Warning: "continue" targeting switch is equivalent to "break". Did you mean to use "continue 2"? in /homepages/7/d561725489/htdocs/demo/wp-content/plugins/revslider/includes/operations.class.php on line 2254

Warning: "continue" targeting switch is equivalent to "break". Did you mean to use "continue 2"? in /homepages/7/d561725489/htdocs/demo/wp-content/plugins/revslider/includes/operations.class.php on line 2258

Warning: "continue" targeting switch is equivalent to "break". Did you mean to use "continue 2"? in /homepages/7/d561725489/htdocs/demo/wp-content/plugins/revslider/includes/output.class.php on line 2941
 Prime Properties Club – Unique country house in Muchamiel

According to the Council’s record Finca Belon was built in the 18th century by Italian noblemen, it was a farm house for the adjoing villa. The property was called De Dalt. During the XVIII century it was owned by Juan Bautista Bellon y Mabylli a local authority in charge of the Land and Sea Consulate of Alicante. The Bellon family was originally from France and settled in the Muchamiel area around the XVII century. This major, more elegant mansion even exits and this is the one of the some neighbors in the solitary neighborhood. The orchards surrounding the house were mainly planted with olive and orange trees. This finca included the land that is approximately 17.000 square meters.

The interior of this home has been modernized to have very large spaces for all rooms, from kitchen to living spaces to bedrooms. Seller has taken what were originally seven very small bedrooms, which the house had when was sold in 1984, and turned them into three bed rooms upstairs. One building remaining on the property, today, is the original olive oil factory, which has been certified by the town hall as the only one in existence in the Alicante province. The machinery of olive oil factory dates back to the beginning of the XX century and was manufactured in Alcoy.

It is a fitting conclusion that the classic, 18th century Spanish home is filled with an eclectic blend of opulence, luxury, history and contemporary design, making it a very rare property. It is the perfect Spanish Hacienda that one can never find, but only can imagine.

A true piece of heaven, this Mediterranean oasis is close to the city of Alicante, Spain, 8 minutes from the wonderful San Juan Playas, 3 minutes to the major central highways, 5 minutes to one of the areas best golf courses, and 20 minutes to the international airport.

Completely renovated with imported built-in furniture from around the world. The designer decorated home greets you with a custom made wrought iron rose front gate and an impressive driveway of Cyprus trees and beautiful fuchsia bougainvillea.

You enter into a large entrance hall that also serves as a lounge with direct access to the back inside garden.The outside front verandah is where all your spring and summer entertaining will be, built within a very special eco-climate garden as a backdrop. Â A fresh sea breeze blows gently through this area, no matter how hot the Spanish sunshine gets.

The upper level master bedroom features a dressing room, a two-room bathroom, and an exotic message room. There is an adjoining white ceramic tiled private terrace, perfect for sunbathing. There is one more en suite bedroom on this level and space to make two more bedrooms rooms or office with a modern 3,5 meter picture window looking out to the pool and garden.

The lower level includes another guest room, an eat-in kitchen with the massive original fireplace, and one more room that can be used as a formal dining room with another oversized picture window looking onto the garden courtyard. There is an outside guest suite close to the Olympic sized swimming pool, surrounded by a mature garden of unpretentious natural beauty.

Find this property on map 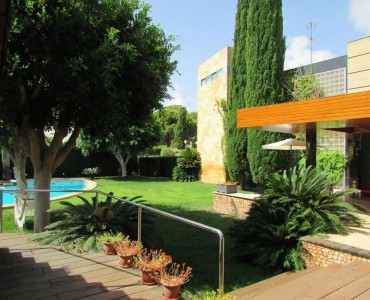 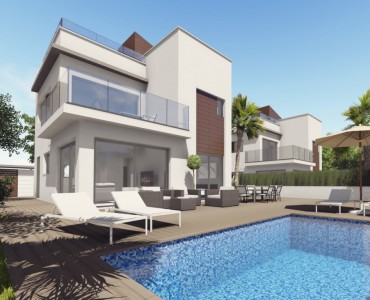 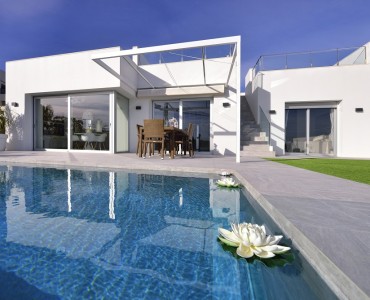 Modern villa with swiming pool near the golf 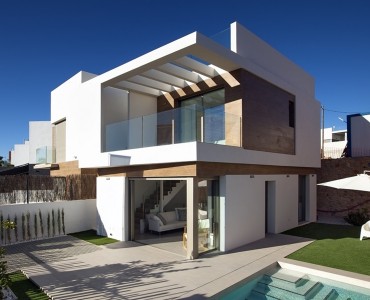 New independent villa near the golf

Buy a home – is one of the most important decisions you can ever make… your home is both a financial and emotional investments. So, we decided create “Prime properties club” for you, who choosing the property looking for a life style. “Prime Properties club” offers access to an exclusive portfolio of luxury golf and beach properties around Costa Blanca, together with tailored services.